The rich history of Vigo the Carpathian extends much further than his appearance in Ghostbusters II.  Born in 1505 in the Balkan kingdom of Carpathia, Vigo rose to power and tyrannically ruled his country for almost a century.

His despotic rule over Carpathia and then Moldavia earned him several titles; “the Scourge of Carpathia,” “the Sorrow of Moldavia,” Vigo the Cruel, Vigo the Despised, Vigo the Torturer, and Vigo the Unholy.  His subjects resented his autocratic rule and suffered greatly under his reign; he was thought to be a genocidal maniac, a sorceror-alchemist using twisted magics to keep himself alive, as strong as ten young men even until his (temporary) death at the age of 105.

Vigo did not die of natural causes — a rebellion by his subjects, after decades of unrest, torture, death and repression — saw Vigo captured and executed in a way befitting his rule.  Poisoned, stabbed, hung, stretched, disemboweled, drawn, quartered, and then beheaded, Vigo’s earthly body resisted death until the very end.  Before his head died, Vigo uttered a prophetic warning:

Vigo was to return in modern day New York, 1989 — his spirit inhabiting the self-portrait, “Vigo the Carpathian.”   This cursed painting was being restored in the Manhattan Museum of Art by museum curator Janosz Poha. Psychomagnotheric Slime flowing in the sewers beneath the Museum eventually gave Vigo enough power to manifest and manipulate the curator, but not fully possess him — to regain human form, he required… a child.  A child?… a child!

Dana Barrett’s baby son Oscar was chosen by Janosz to be the vessel of Vigo’s physical reincarnation.  Stolen away from Peter Venkman’s apartment, Vigo was moments away from possessing Oscar before the Ghostbusters could stop him — sliming Janosz, and then Vigo, with their positively-charged proton packs.  Vigo attempted to possess Ray, but was driven back into his painting, draining his powers and causing him to vanish.

Is this the end of Vigo the Carpathian?  Only time will tell.  In the extended Ghostbusters universe, Vigo returns to his painting (which was relocated to the Ghostbuster’s headquarters) and taunts passers-by, but has no power to control or influence them… yet!

The Scourge Of Carpathia 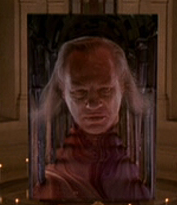 JOIN VIGO FOR 20% OFF YOUR FIRST ORDER

Join Vigo’s once-a-month e-mail list, and we’ll send you a Coupon Code for 20% off your first order from VigoTheCarpathian.com. 100% spam and demon free, guaranteed!